On 11/20/2018, multiple officers were given awards in front of the City Council of Williamsport. Below is the narrative that was read by Agent Damon Hagan in regard to the awards which were given.
“On November 7th, 2017 at 6:34 P.M., Lycoming County Communications received a 911 call reporting a shooting at 2225 West Third Street. Reports indicated that a home invasion occurred at this address, that two male suspects had fled out the back door of the residence, and that a white Dodge vehicle left the area eastbound on West Third Street. Williamsport Bureau of Police Night Watch officers were dispatched to this incident.
Police Officer Nicholas Carrita responded westbound on West Third Street and intercepted the suspect vehicle on West Third Street, heading in the opposite direction. Officer Carrita made a U-Turn and began to catch up to the vehicle, causing the suspect, Paul Heath, to pull over. Officer Carrita exited his patrol vehicle in an attempt to conduct a felony stop, and Heath then exited the suspect vehicle. Heath took aim at Officer Carrita with a semiautomatic pistol and fired multiple shots directly at him, striking him in the right arm. Officer Carrita acted quickly while under fire and used his service weapon to return fire back at Heath before taking cover behind his patrol vehicle. Heath fled the scene just as Police Officers Brittany Alexander and Zachary Geary were arriving in the area. Officers Alexander and Geary, who were partnered together in their patrol unit, made a U-turn and began pursuing Heath, who exited the City of Williamsport westbound on Highway 220.
Officers Alexander and Geary followed heath at high speeds during a dangerous vehicle pursuit which lasted for several miles, weaving in and out of traffic, sometimes at speeds of more than 100 mph. As the primary unit for most of the pursuit, they communicated pertinent information related to the suspect vehicle, which allowed other officers to respond and assist. Their unit was eventually replaced as the primary unit when the suspect used an off ramp to turn around, and they joined with other units pursuing Heath, who was now headed eastbound on Highway 220. It was during this part of the pursuit that Heath fired shots back towards a State Police unit which was ahead of Officers Alexander and Geary. Heath fled to the Sheetz in Linden, PA, where he pulled of the highway, stopped, exited his vehicle and began firing at the officers approaching the scene. Heath then used a firearm to take his own life in the presence of Officers Alexander, Geary and many other members of other law enforcement agencies in Lycoming County.
Night Watch officers who responded to the initial crime scene discovered the victim, Shawn Graham, lying on the floor inside the front door suffering from a gunshot wound. Graham later died of his wound. Police Officers Tyson Minier, Christopher Salisbury and Damon Cole were involved in the initial response to the scene, the preliminary investigation and scene security until assistance could arrive. Field Supervisor Richard Hofford acted quickly by responding to the scene of Officer Carrita’s shooting and by taking him to the hospital for treatment. Watch Commander corporal Brian McGee showed extraordinarily calm and poise while he managed three separate critical incident scenes and coordinated manpower and resources from his position at City Hall until such time as help could arrive.
Subsequent investigation revealed that Heath and an accomplice went to Graham’s residence to rob him of a large amount of money, and that during this robbery, Graham was shot and killed. The quick response and extraordinary courage of Police Officers Nicholas Carrita, Brittany Alexander, and Zachary Geary directly led to the apprehension of Paul Heath. Evidence gained from this led to information that made it possible to identify and alter capture Heath’s accomplice, Jameir Hines, in the City of Philadelphia. If not for the actions of these three brave officers, the teamwork and leadership provided by other members of this police squad, and the assistance of many officers from the other agencies within Lycoming County, this crime might certainly have gone unsolved. The actions of these officers reflect great credit upon themselves, the Williamsport Bureau of Police and the City of Williamsport.” 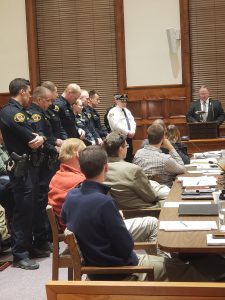 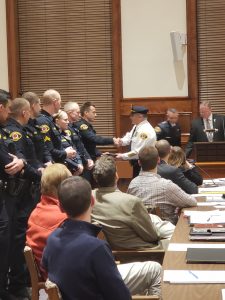 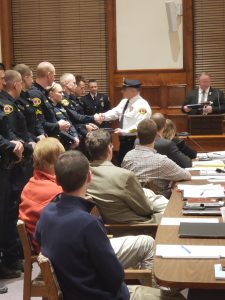 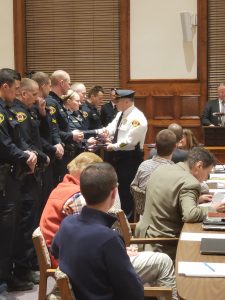 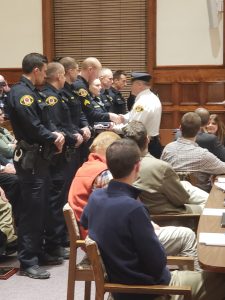 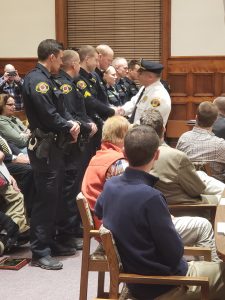 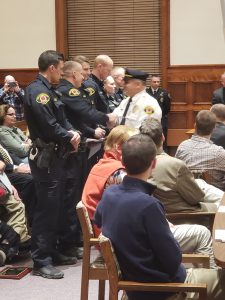 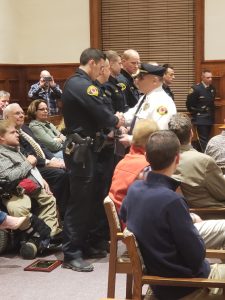 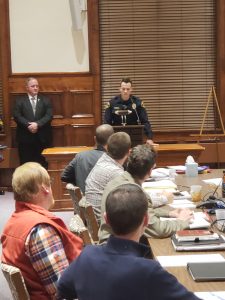